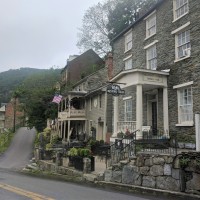 While I was living in France last year, one of my friends came to visit me in Europe and we met up in Copenhagen June 23-26. Copenhagen is the English version of København which comes from “merchant’s harbor.”

Some notes on culture in Copenhagen

To start, this was a really awesome time to visit Copenhagen (end of June). It is graduation time for high school students!!! I know that doesn’t sound too exciting for Americans… but in Denmark, parents pitch in to rent party buses / trucks for graduating students who deck them out. The students then parade through the streets on these floats in costume (although the most important costume piece is the graduation cap!). It’s a way to keep them safe while drinking and partying after graduation and it makes the whole city feel like a festival! Throughout the weekend, students pile in their trucks, make noise, drink, and make stops for food!

Denmark is in the European Union, but uses Kroner aka DKK. Today, 1 USD is equal to about 6.28 DKK. This is around the same as it was last year.

For Americans, Copenhagen can be a wee bit expensive. It wasn’t as alarming as Switzerland, but still felt inflated.

Speaking of money… do not pass Go, do not withdraw money. That’s right, Copenhagen is a cashless society. Unless you want to buy drugs, you do not need any cash. Everyone pays via app on their phone and it has cut down on store robberies – though some robberies still do happen – their transactions are easily traceable via digital means. Even homeless people accept mobile payments. 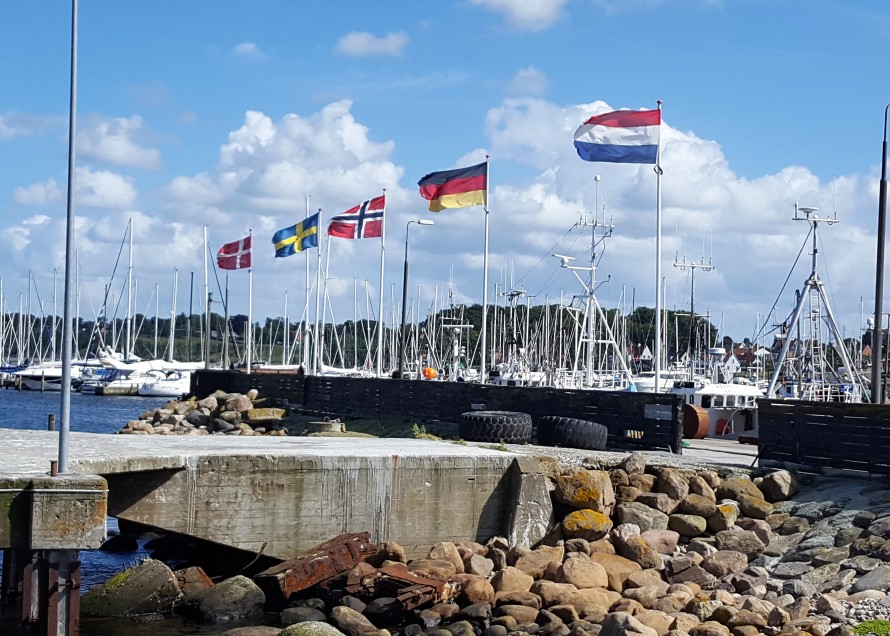 My biggest tips are to eat in government buildings (see my United Nations post for how great gov’t cafeterias are) or from grocery stores or at markets. The Danish cuisine is heavy with seafood! Specifically salmon of every variety.

My favorite market was, Torvehallerne, and I was in there on the daily. 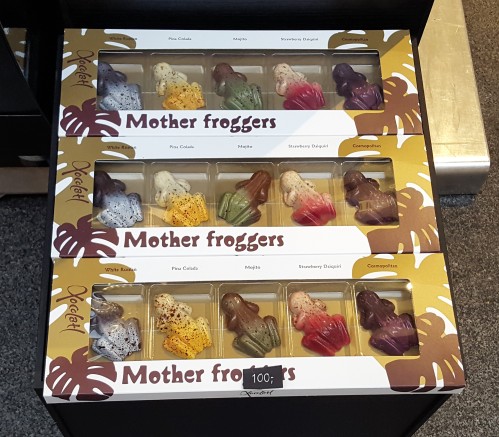 Lemon licorice ice cream… a Scandinavian delicacy… and they put whipped cream and jelly on all the ice cream!!

From the grocery store

Also, Danishes are from Austria, so don’t even ask.

Copenhagen is pretty darn bike friendly. The bike paths were HUGE and did not end suddenly like they do in other cities. Everywhere you look, there are bikes. There are manual bikes for rent and electric bikes for rent. There are mulitlevel parking garages specifically for bikes- I can’t explain what this looks like so I found a photo on the internet.

The people of Copenhagen bike everywhere… and so, they will travel anywhere as long as it is under 20 minutes. If it is 20 minutes or more away, it is just too far. 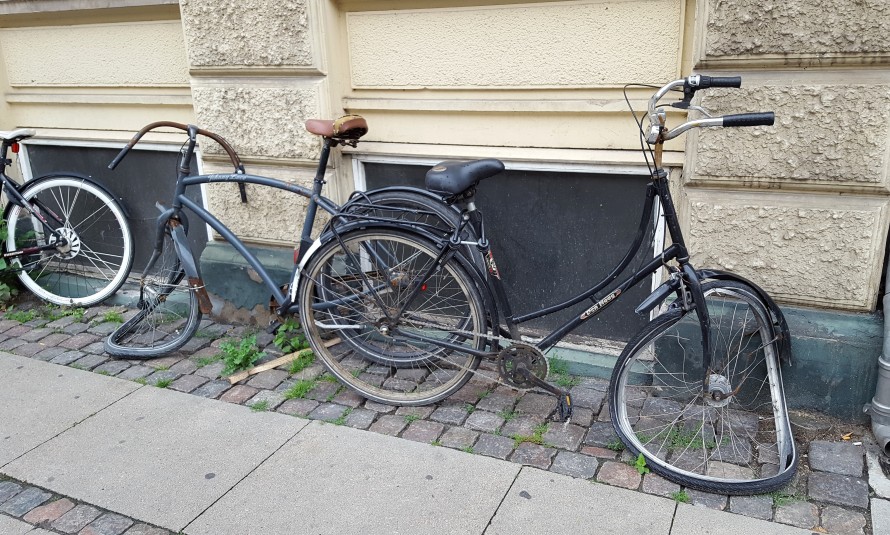 Bikes being reclaimed by the earth

Getting Around: Public Transportation

Very easy to use and affordable! The metro was driverless and the buses had live TV playing inside. The whole system was incredibly clean and had an ETA countdown clock to the SECOND for when the next train would arrive.

Currently the waterways around Copenhagen are pristine and swim-able, however, that was not always the case. The water used to be so polluted that it was not safe to drink and wells were covered in case children wanted to take a sip. Some texts show that beer was the prefered drink for both adults AND children, because it was safer than water.  In the 1960s and 70s, dead fish floated freely and oil spills, industrial waste, and algae made the waterways unsafe. Even as recently as 1995, the waters were piped in current swimming areas. But thanks to a massive investment from the government and a complete overhaul of the sewage and water systems, Copenhagen has some of the cleanest water in Europe.

Public drinking water is now so clean that it’s better than bottled water, says Mayor of Technical and Environmental Affairs Morten Kabell—and that’s without chlorine or other chemical processing (only aeration, pH adjustment, and filtration).

Even though the water has improved, beer is still a huge part of the culture in Copenhagen. Makes sure you visit the breweries and have some craft beer while you are in town!

Welcome to the safest place you’ll ever visit… besides maybe Switzerland. But even the Swiss don’t leave their babies outside while they do their shopping or drink their coffee. That’s right, they feel safe enough here to leave their babies outside with just a monitor to know if they are crying. That is literally all you need to know about how safe you are in Copenhagen. 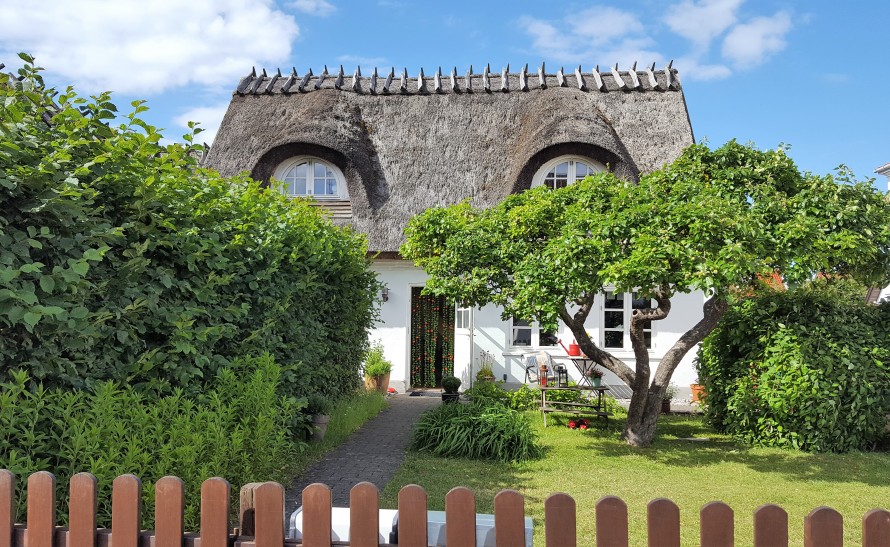 The cutest house on Earth – spotted in Denmark

Changing of the Guard

The guards start walking at the Rosenborg Castle every day at 11:30am and arrive at Amalienborg Palace at 12pm noon every day. You have the chance to walk with them (theoretically). However, they just walk in the middle of roads and in construction zones where pedestrians (us) aren’t allowed so it can be a bit of a challenge. Make sure you know they start at the park and not at the palace! Everyone was confused about this. Good luck finding them!

Nyhavn literally means “new harbor.” This might be the most iconic image of Copenhagen and is probably what most people picture when they think of Copenhagen. This harbor was built in the 1670s and pedestrianized in the 1980s when it started to become a tourist destination. Now it is lined with shops and restaurants. 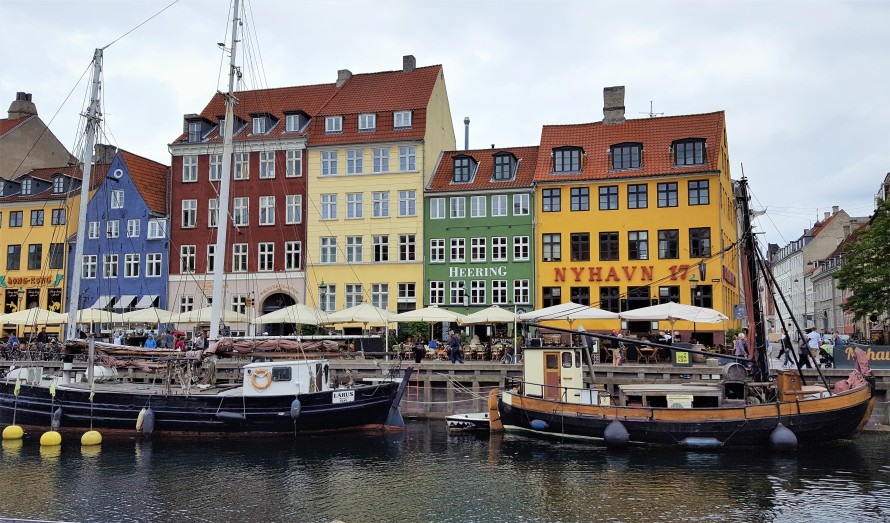 While here, we decided to go on a canal tour. They have them every half hour or so and you can buy them on location so there is no reason to order ahead of time. On our tour, we passed the Hans Christian Andersen house, the little mermaid statue (your best bet for getting close and snapping a photo), and many other architectural highlights in the city. At one point, our guide told us that they were instructed to make the some faces on the houses look like alligators, but since they didn’t have alligators here they made them look like dragons. Ali turns to me, “yeah, because they had dragons here.” 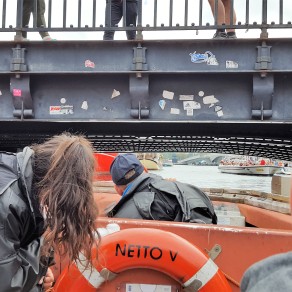 Watch out for the low bridges ^

As the story goes, there were no green spaces in the 60s / 70s for children to play in. The area which is now Christiania, was an abandoned military ground that was closed off to the public. On September 4, 1971, neighborhood parents were fed up and broke down the gates so their children could play in it. This was also seen as a protest against the Danish government for the lack of affordable housing in Copenhagen. The society became “open” on September 26th as a self governing society seeking the opportunity to rebuild society from scratch. They have their own rules and their own government, separate from Denmark. 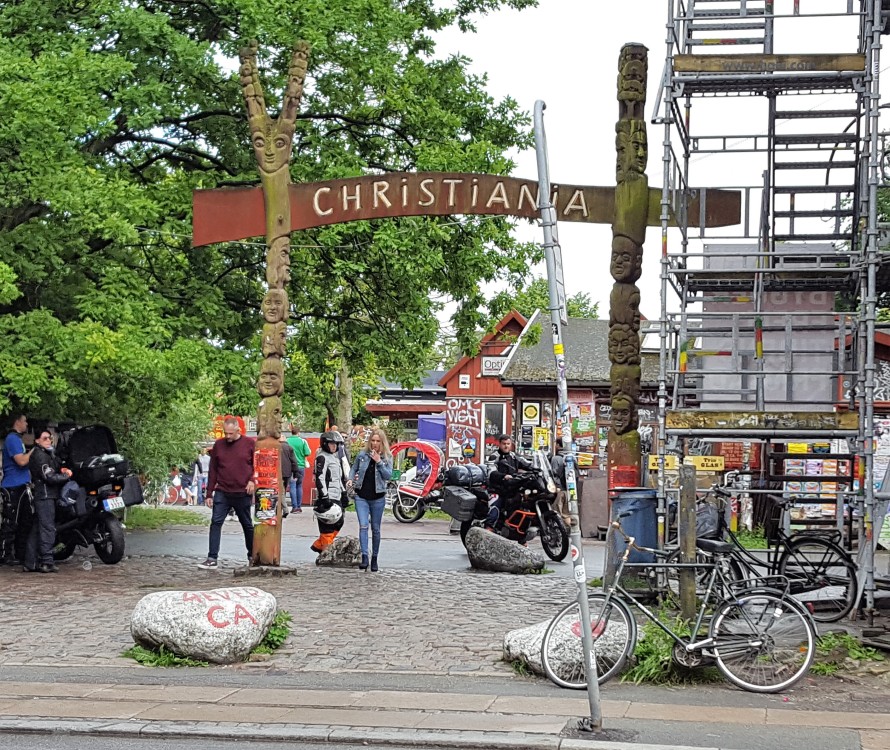 Currently, around 900 people live in Copenhagen’s Hippie Town that holds yoga and meditation in high regard. I cannot possibly do justice to the history and significance of Christiania in this post… but I do recommend for you to look into it in your free time and visit given the chance. 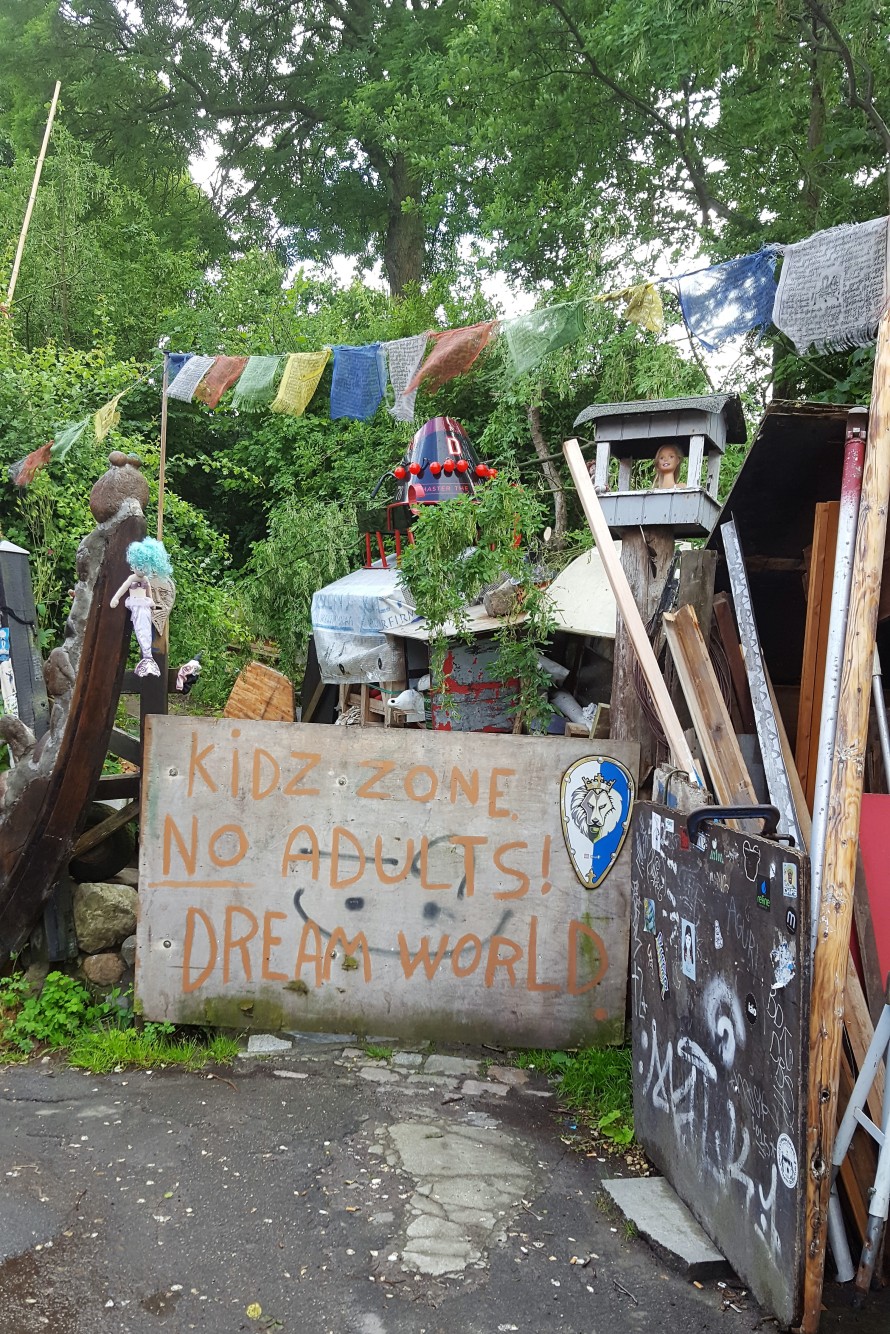 Once inside Freetown Christiania, you will find food, music, marijuana, and the most awesome displays of creativity you will ever see. Every house and structure I saw was the coolest. Everyone builds their own home. There is a lake / river, swans, and plenty of places to walk around. I didn’t take nearly enough photos, so enjoy Buzzfeed’s collection here.

I was in Copenhagen while I was training for my first marathon, so I had the opportunity to run through Copenhagen’s beautiful parks. They are all well maintained, full of flowers, and frequented by stunning birds.

I was told that Tivoli means “sprinkles”… but I can’t find any evidence of that on the internet. Tivoli Gardins in Copenhagen was named for Jardin de Tivoli (French for: Tivoli Gardens) in Paris, which was named for the Italian Tivoli town that acted as a summer resort during Roman times.

Tivoli Gardens in Copenhagen is an amusement park that opened on August 15, 1843. It is the second oldest operating amusement park in the world – the first is also in Denmark and I will talk about it below under “Day Trips.” It was very cute and fun, and I definitely recommend a visit. 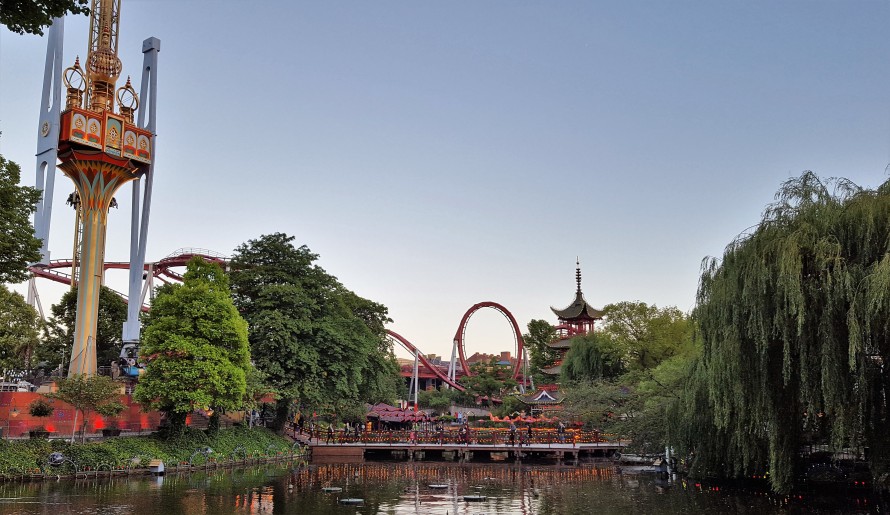 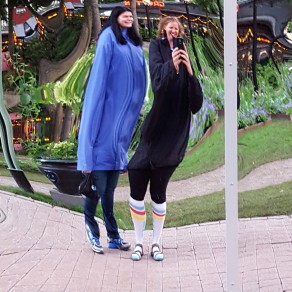 This was a really fun brewery to visit. Much like other breweries, you walk through a tour of the facility and the beer-making process and then proceed to the gift shop and tasting. They have beer tasting every hour 12-6pm on the hour for 75 DKK. The free beer that you get with admission can be collected at any time and the free surprise gift they promise you is a Carlsberg logo pin. There are horse-led rides (you sit on hay bails in the trailer) every fifteen minutes or on demand. 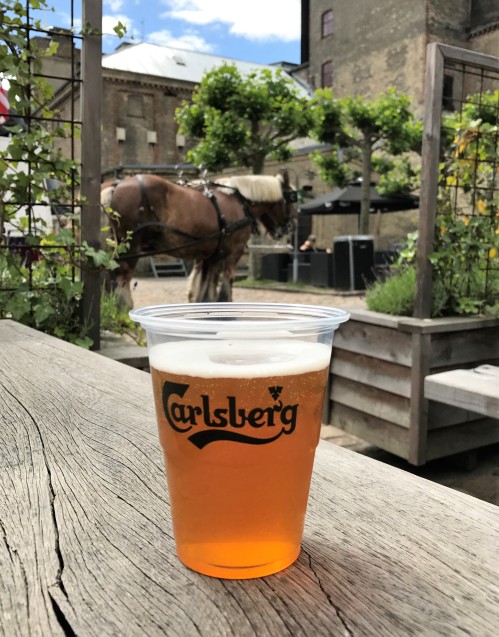 Copenhagen sits on the eastern shore of an island called Zealand and we decided to take a day trip around the northern shore of the island. This was fairly easy to do. We took an hour long train from Copenhagen central station to Kronborg Castle. A lot of people are doing this so it does not feel remote. It was another hour to Hornbaek and then another 2 hours to Bakken. If you choose to do this, map out your stops on Google first, write down the schedule, and expect transfers. The train and bus rides were scenic so it did not feel like a drag to be riding so long. If I were to do it again, I would do it the same way.

This castle was visited by Shakespeare who then chose it as the setting for his play, Hamlet. You can almost feel Hamlet here so I recommend reading it (or watching the play) before your visit. 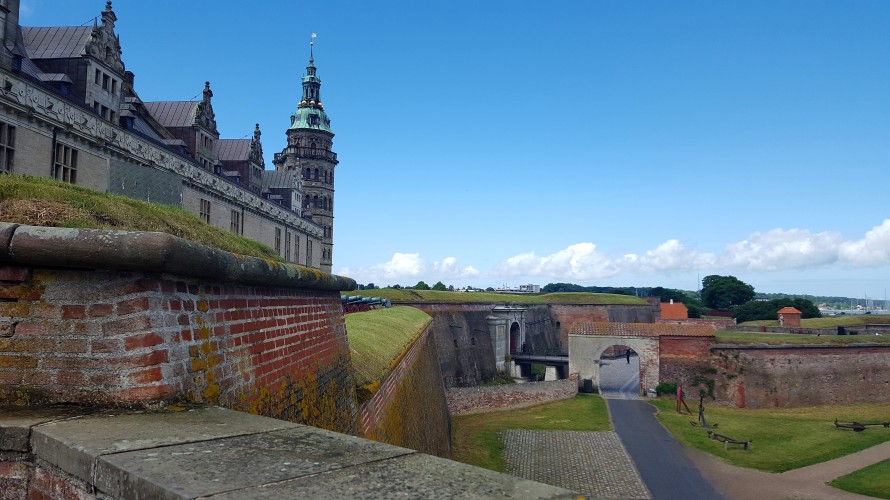 They do re-enactments of the play throughout the different rooms. There is a free audio tour that you download onto your own phone. Make sure you bring headphones.

Hornbaek is located on the north shore of Zealand and is part of the Danish Riviera. This was a really relaxing stopover on our long day. There was a sandy beach, a marina of ships, and cute homes and restaurants. I saw other people swimming, but I didn’t even want to take off my jacket. We enjoyed the sun and the sand before we had to leave. We stopped for an ice cream before catching our train out. 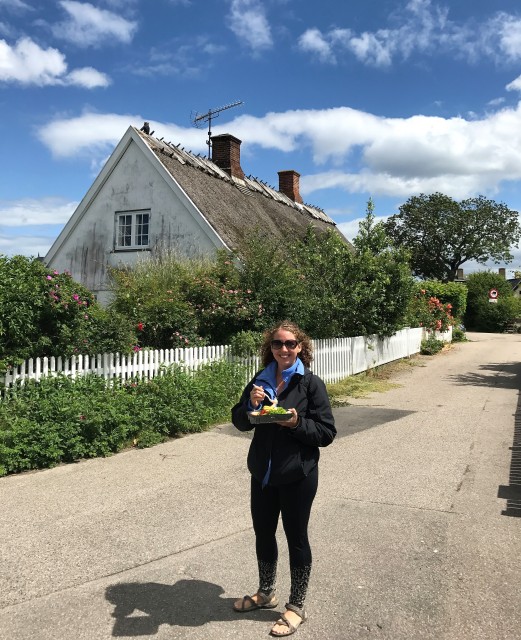 Bakken is the oldest operating amusement park in the world. It opened in 1583!!! Definitely come here! 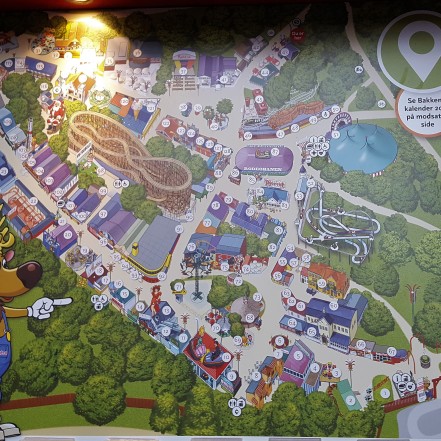 I only included recommended activities in this post and left out anything I deemed unworthy. If it’s listed above, it is worth a visit! My favorite parts of Copenhagen were walking through Christiania and seeing all the cute houses.

When you go, have some seafood, have some licorice, ride a bike, and take in the hygge!

Me on my way out of Copenhagen and passing my favorite market, Torvehallerne on the way.