As it is the week of Saint Valentine’s Day, I am going to keep my post in the spirit of love… and what greater love would there be than world peace? Valentine’s Day morning, I ran (bussed) over to the United Nations building in Geneva to gather some material for this post.

The United Nations was born from the League of Nations… so let’s talk briefly about that first… a free history lesson!

The League of Nations

After the atrocities of World War I, United States President Woodrow Wilson had his advisor, Edward M. House, write up a draft outlining activities considered too unethical for sovereign states to continue to partake in. Wilson and his team presented the draft at the Paris Peace Conference in 1919, and from this the League of Nations was born. Wilson was later awarded the Nobel Peace Prize for this although the United States never ended up joining the League because of internal unwillingness to compromise within the American government.

The League of Nations was founded on January 10, 1920 and would eventually meet in the Palace of Nations in Geneva, Switzerland which was constructed between 1929 and 1938. The group’s goal was to prevent a second world war by settling international disputes through negotiation tactics. It was the first group ever known in existence whose main purpose was to maintain world peace. The group was not successful due to several reasons including its exclusion of several major countries, unanimous voting standards, and inability to work together to make decisions. At its largest, there were 58 members. The greatest failure of the League was, of course, when World War II broke. Throughout and after the war, the League fizzled out and carried out only minimal operations.

At the end of World War II, at the 1943 Tehran Conference, the Allied powers created the idea of the United Nations to replace the League of Nations. There was a meeting in the summer of 1946 in San Francisco where the 50 attending governments signed the charter for the United Nations on June 26. The United Nations was officially established on October 24, 1945. 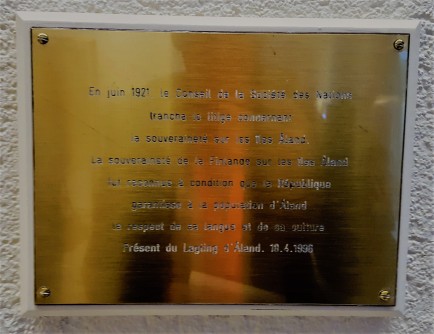 At its commencement, there were 51 member states… Now there are 193 current member states with the Holy See (sovereign state containing Vatican City) counting as the 194th. Palestine and Holy See/ Vatican City are the only ones with observer status. The four countries not currently recognized as so by the United Nations are the Holy See/ Vatican City, Palestine, Kosovo, and Taiwan. There are five permanent members who have veto power – the United Kingdom, Russia, France, United States, and China. 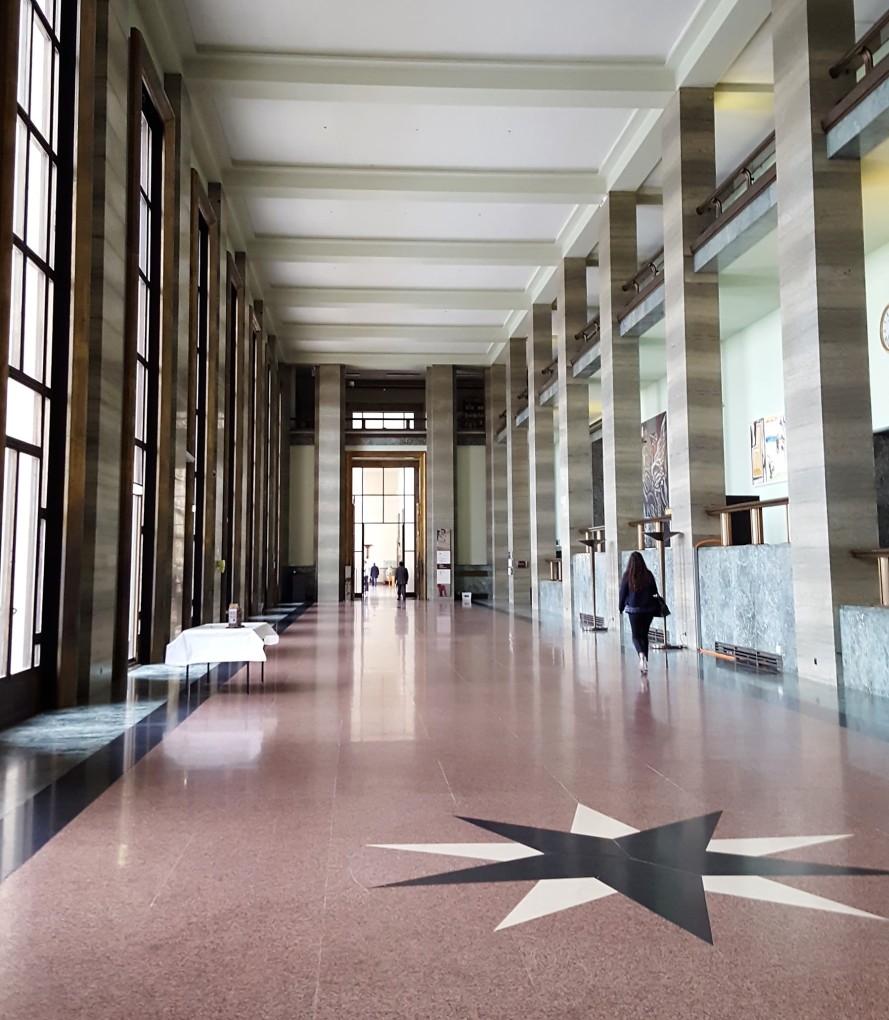 U.N. hallway leading through to the old palace.

There are six official languages of the United Nations: French, Chinese, English, Russian, Spanish, and Arabic. These languages are not the most widely spoken (otherwise Hindi and Indonesian would have made the list) but are correlated with the winning countries of WWII and the current official languages of the world’s most powerful countries. The most recent language, Arabic, was added in 1973 as the Arab members were able to cover the translation fees necessary for adding a new language. 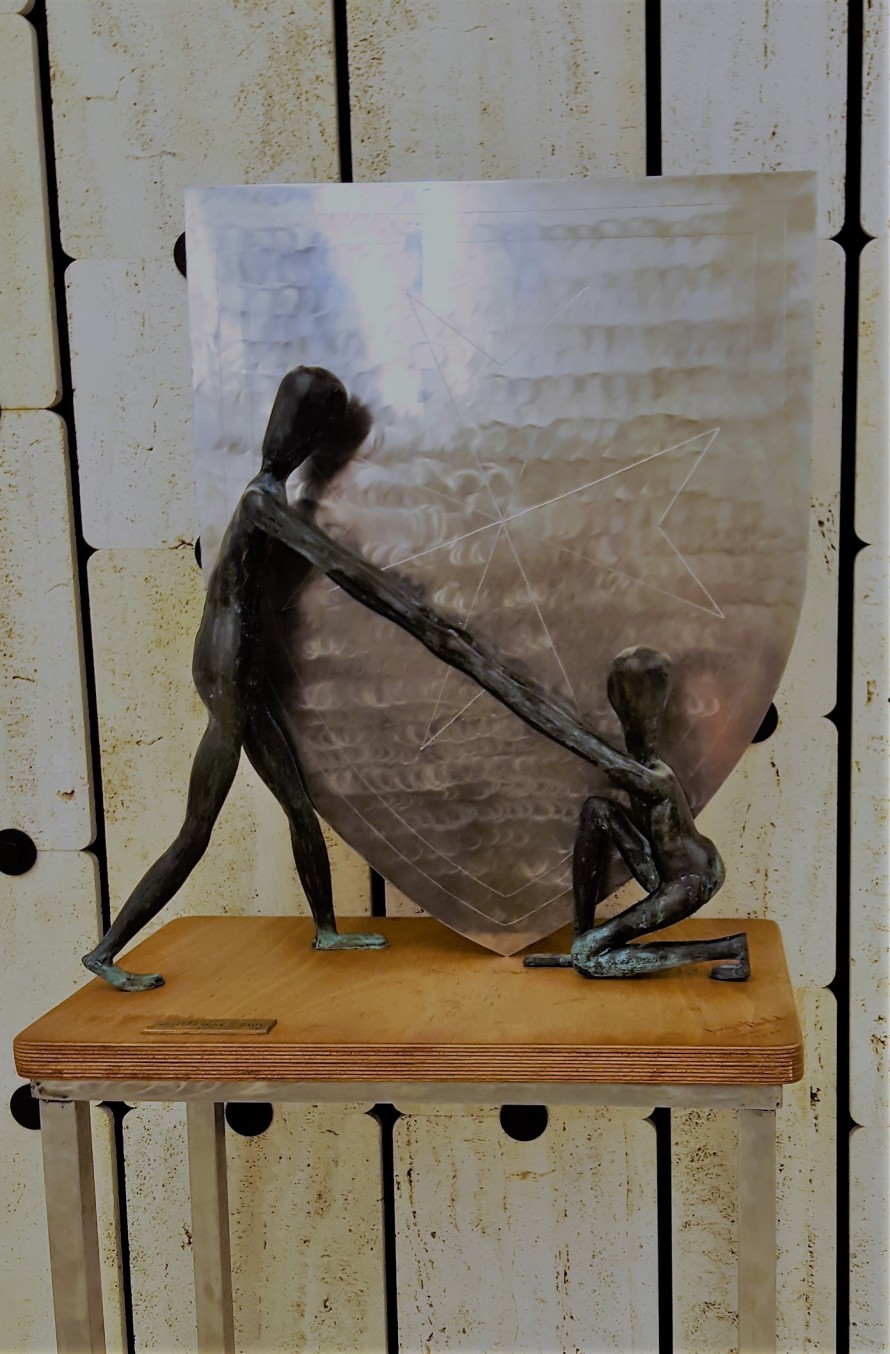 The working language is the one that the entire meeting is conducted in. However, a delegate may respond or speak in any of the six official languages of the UN and have his / her speech simultaneously translated by translators working in booths. As there can be many meetings running at once, it is difficult to staff all the translators necessary for each meeting. Because of this, translators are allowed to translate from other translators by tuning into their booths. For example, I may be a translator who speaks Russian, French, and English and am currently working in a booth to translate to English. If an Arabic speaker begins speaking, I will tune into a booth that is translating into either Russian or French and then simultaneously translate that into English.

The headquarters of the United Nations are in New York City with the other three main offices in Geneva, Nairobi, and Vienna. There are numerous smaller offices around the globe. Geneva is second in size to New York. According to our tour guide, Nairobi’s office focuses on environmental protection and Vienna’s focuses on drug trafficking.

The price of admission is 10 CHF for students and 12 CHF for adults. The tours seem to be on the hour. I was under the impression that the visiting hours were between 10am and 12pm and also between 2pm and 4pm, but our cashier told us we might have to go on the 12pm tour since we were a little late for the 11am. 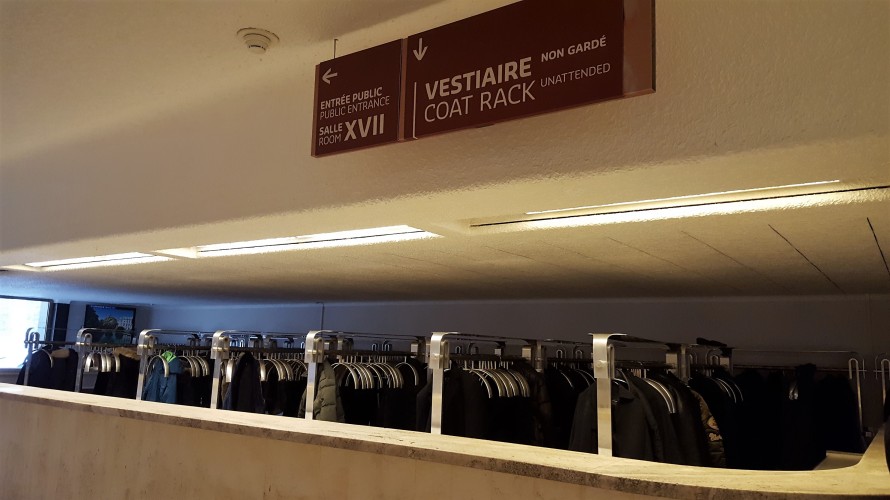 This first room we visited was the “Room of the Emirates.” This room was designed as a gift from the United Arab Emirates. The floor of the room is orange and gold to represent the unique colors of the UAE desert. The wood panels on the walls are made with curvature reminiscent of wind in the dunes. The ceiling features LED panels which project the Emirate sky from dawn until dusk.

This next room is the Human Rights and Alliance of Civilizations Room. The United Nations Commission of Human Rights had a controversial beginning. Many of its members had poor human rights records, with many violations in their own states. It was a draw for countries with poor human rights records to want to be elected to the commission so that they can defend themselves from the attacks. There was no constructive discussion of human rights issues, just finger pointing and criticism from countries demanding that their way is the best way. 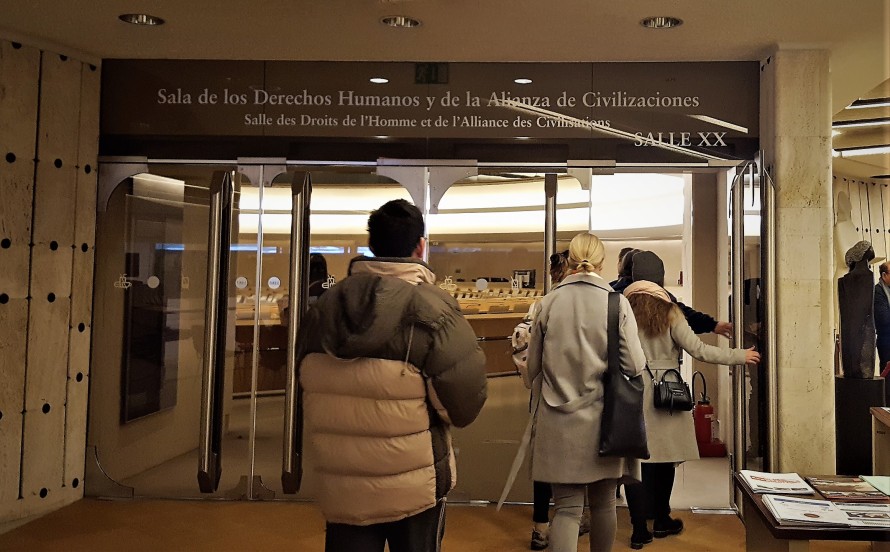 In 2006, the United Nations Human Rights Counsel replaced the Commission of Human Rights. This new UNHRC has new policies and standards in place to help avoid problems of the past. There are 47 countries on this committee currently. Miquel Barcelo made the ceiling art over two years with 20 assistants. Much like the Sistine chapel, he created it right on the ceiling. He screwed in all the stalactites separately then walked around blasting 35,000 kg of paint upward. The colors of the stalactites look different depending on where in the room you are sitting. It is made from a epoxy resin and weighs 24,000 kg. 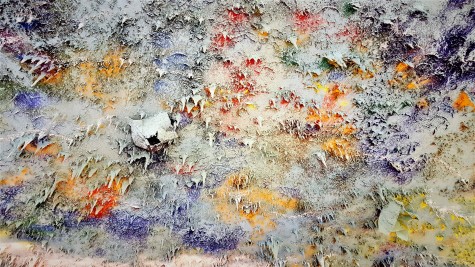 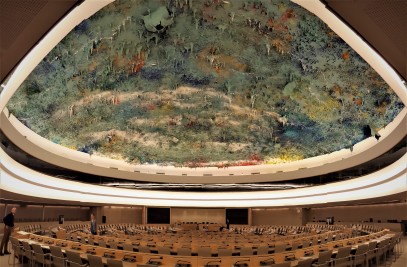 This painting was a gift from the Chinese. It is a painting of a scene from Beijing. The novelty of this artwork is the illusion of the path facing you straight on no matter where you are standing. I tried out a few of the angles and am including my photos below. 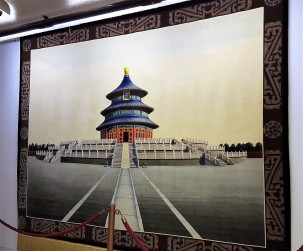 Through this hallway, we walked into the old palace. 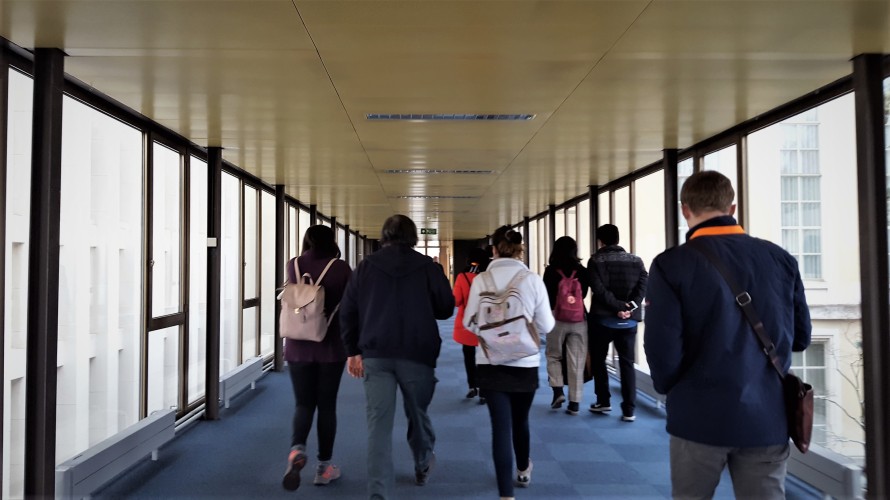 Outside this window you can also imagine the image of Mont Blanc (photo below), the highest mountain in Europe. It can be seen from here only 60 days out of the year due to the cloudy weather covering the Geneva.

What you can see, on the lawn, is the Celestial Sphere (photo below, right). It used to be known as the Woodrow Wilson Memorial Sphere as it was a gift in 1939 from the Woodrow Wilson Foundation to the League of Nations. It used to be covered in gold and rotate to display its illuminated constellations, but because of weather and water damage, it has since degraded and broken. It has not been repaired due to the UN limited budget of 2.7 billion USD per year. This may seem like a lot, but, according to our tour guide, it is the same budget as the fire dept. for the city of Tokyo works with per year and it is smaller than amount of money spent on armaments in a 24 hour period.

What you can also see, on the lawn, is the “Conquest of Space” monument (photo below, left). Our tour guide called it “The Man on the Moon” but I am unable to find supporting evidence of this on the internet. This was a gift from the Soviet Union in 1971. The USSR originally wanted to gift a rocket ship, but it was too big / extravagant for the Palace of Nations grounds. They made this structure instead and covered it in titanium – the same material used in rockets. There is a 3x larger version of this in Moscow. 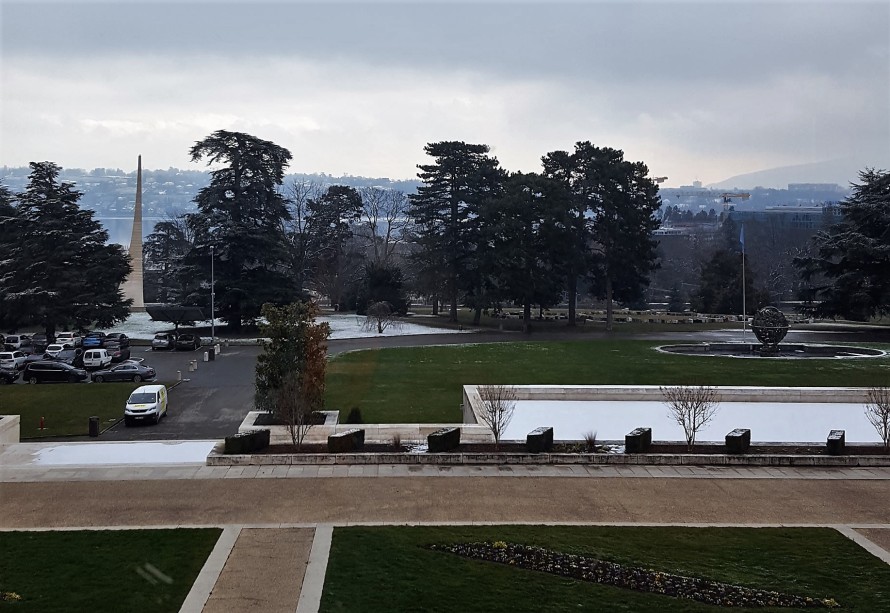 “Conquest of Space” on the left, imaginary Mont Blanc in the center, and the Celestial Sphere on the right.

This next picture is the largest conference room in the United Nations, the Assembly Hall. You may recognize it from the TV! I sure did 🙂 The symbol for the United nations is front and center. This projection of the world is preferred as no one country is in the center and olive branches surround the world to symbolize peace in the world. This was the first room to be equipped with the simultaneous translation system described above, a gift from the United States.

The United Nations faces controversy and criticism over many of its actions, but I am glad that people in the world care enough to voice those opinions. The organization is not perfect, but it is improving with time. Though it may have varying degrees of success in humanitarian ventures and aid provided, that does mean that there are people who were suffering and benefited from the U.N.’s existence. We are nowhere near world peace at the moment, but I am hopeful that organizations such as this one bring us closer with every day.

I enjoyed my visit to the United Nations. The building itself was very beautiful and had nice artwork in every hallway I went through. I am disappointed in myself for never visiting the New York headquarters, having lived by it my entire life. I guess that just gives me another to-do item for when I return home 😉

We usually eat lunch at CERN together on Thursdays (after my morning yoga) and so are used to these government cafeterias. They are the most affordable way to eat out in Geneva and are also very high in food quality. The United Nations did not disappoint. 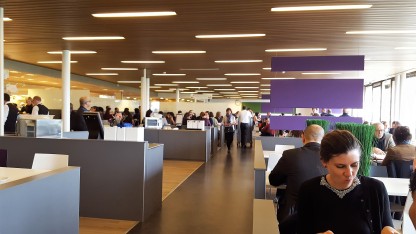 We did spend a little more than usual because this was a special occasion – but together, the meal was 36 CHF – around 39 US dollars.

I had breaded turkey with melted reblochon on top with grits and carrots on the side.

My husband had shrimp skewers with raspberry sauce and peas and celery on the side. 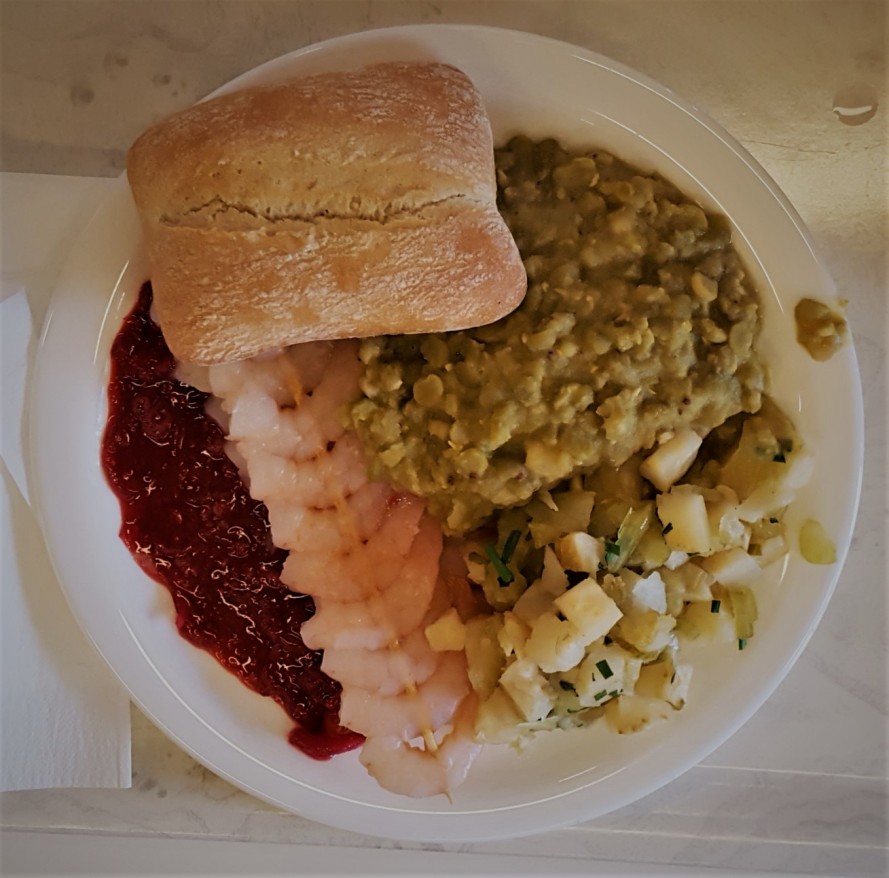 We shared a rose mousse with raspberry sauce for dessert. 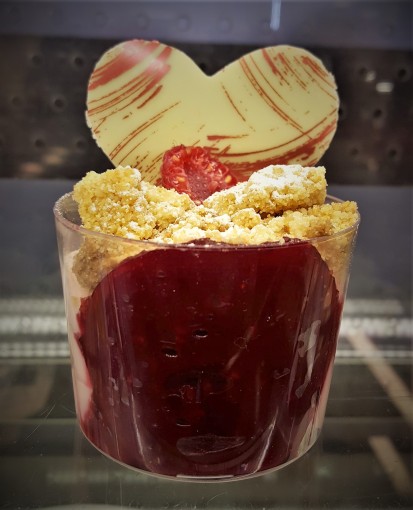